skip to main | skip to sidebar

"Recently SESB had been shutting off power supplies in out-of-town areas on a rotation basis. Last Friday, it was the Kampong Kerupang Zone and earlier the Rancha Rancha.

"Power supplies are shut off at least for a few hours causing inconvenience to consumers. Why should we be victimised? SESB should respect Labuan consumers. We are not a third class district," added Fauziah.

She said SESB was unable to cope with demand for power, especially at peak time, because it had not done good planning and projections.

"Every time SESB calls for a press conference it assures that blackouts would be a thing of the past but this still going on" Fauziah said.

She said unreliable power supply could be deterrent for investors and others. At the same time, continued occurrences could damage home electrical appliances.

She said consumers should not be told to buy generators as not many could afford.

"Probably SESB is the one that needs more powerful mobile generators to serve zones where power had been cut off."

SESB said recently that it had been forced to expand areas involved in power shedding due to damage to several Independent Power Production (IPP) Stations in Sabah.

It was forced to do load shedding because its present generator capacity could not match increasing demand, especially at peak hours.

Labuan is now one of the areas under its load shedding plan.

Posted by labuankini at 8:01 PTG 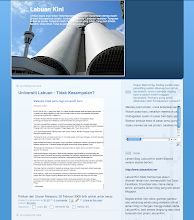